Đề bài: The line graph shows the global demand of different textile from 1980-2015

The line chart illustrates total textile demand over the globe between 1980 and 2015.

Overall, the demand for polyester, cotton, and cellulosic textiles rose over the period shown, while the opposite was true for wool. Among them, polyester saw the most significant growth.

In 1980, the demands for cellulosic and wool were almost the same, at around 5 million tons each. After that, they followed opposite patterns at a similar pace. From 1980 to 2000, while the figure for cellulosic dropped slightly then increased to about 10 million tons, that for wool increased then declined to almost no demand.

Đề bài: Although there is a lot of translation software available, learning a language could still be advantageous. To what extent do you agree or disagree? 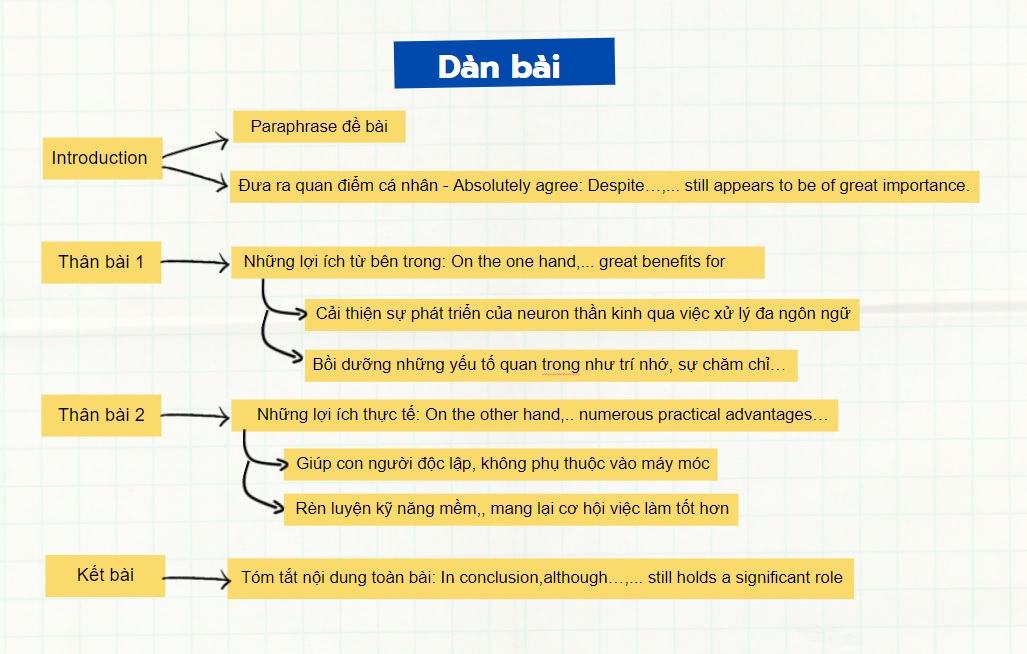 In today's modern world, technology has made great progress, resulting in numerous translation tools; however, several individuals still believe that studying a new language still appears to be of great importance. From my perspective, I absolutely agree with this viewpoint.

On the one hand, learning a foreign language could support the development of inner brain functions. When switching between different languages, more neurons are put to work as the brain needs to detect new phrasing then convert it back to one's mother tongue. Such complicated lexical analysis being operated regularly can aid neurological development, especially in children. In fact, recent studies have shown that multilingual people appear to have higher intellectual capacity than the monolingual. Additionally, mastering a new language requires a great amount of time and effort, which assists the advancement of cognitive skills, promotes memory capacity and enhances perseverance. This can be seen as a long-term benefit owing to the necessity of these traits in different aspects of life.

On the other hand, acquiring a language could also bring about practical advantages in both private and professional life. Firstly, due to the inconsistent accuracy of common translation programs, along with costly premium softwares, mastering a language via self-study perhaps is the most viable option to individuals with limited budgets. In urgent situations without access to the Internet and portable devices, travelers having a grasp of the foreign tongue can converse with the locals, and therefore receive support on time. Besides, assimilating a new language demands considerable practice, hence verbal communication skills and self-assurance. As these are conducive key attributes of a competent employee, career prospects of the multilingual could be promoted.

In conclusion, despite the expansion of translation applications, studying new languages still holds a significant role because this supports brain development and leads to numerous benefits in real-life situations.