The maps present how a small museum and its nearby area had changed from 1990 to 2010. In general, the museum area had not undergone many dramatic changes, except for the expansion of the car park and the introduction of a new cafe.

Đề bài: Nowadays, more people move away from their friends and families for work. Do the advantages outweigh the disadvantages? 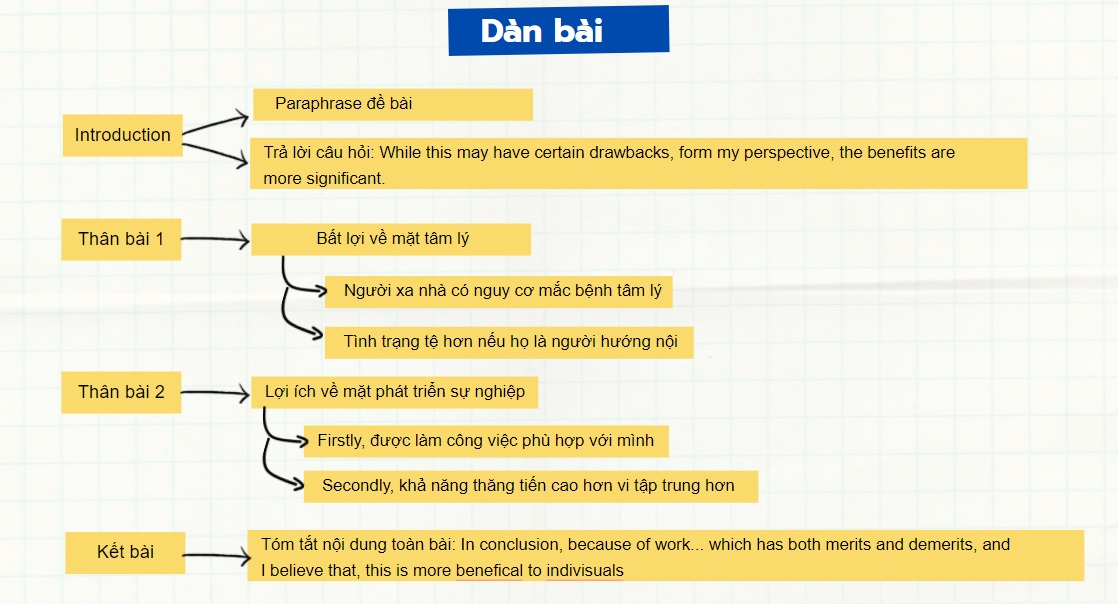 These days, many people are willing to sacrifice the chance to stay near their families and friends to relocate for work. While this may have certain drawbacks, from my perspective, the benefits are more significant.

On the one hand, people who move away from families and friends are more at the risk of enduring mental health problems. Physical distance usually discourages them from confiding their troubles to their loved ones. This is often the case of migrant workers who keep their suffering to themselves just to ease their families’ worries. Consequently, they are more vulnerable to mental health issues, such as depression, while their families and friends at home remain unaware. This circumstance could even get worse if these people are introverts who tend to distance themselves from their new colleagues.

On the other hand, for those relocating for a job, they are more likely to achieve career fulfillment. For one thing, there are often better career prospects available outside their hometown to people of working ages. Bigger cities or countries are hubs of various industries, which promise more career choices and significantly higher wages. Therefore, it is far easier for people to find a suitable job. Secondly, this can help people, especially those who have just reached adulthood, advance their careers faster. Living with parents could indeed trigger emotional issues because of family conflicts, which could negatively influence their work performance. Without that potential disturbance, young people can wholeheartedly devote themselves to their work and thrive.

In conclusion, because of work, more people are living away from families and friends, which has both advantages and disadvantages, and I believe that this is more beneficial to individuals.