The graph shows the average Japanese month salary (Yen) from 1970 to 2000, and the prices of black and white televisions and color televisions during the same period.

The line chart illustrates the average monthly income of Japanese people and the cost of black and white, and color TVs over a 30-year period.

Overall, while the average salary witnessed an upward trend over time, the opposite was true for the price of both types of televisions. In addition, for most of the period, the price of a television was higher than the average monthly salary of people in Japan.

In 1970, a black and white television cost around 110,000  Yen. Ten years later, the cost saw a sharp decline and then continued to drop gradually to about 20,000 Yen by 2000. The price of color TVs followed a similar pattern, costing about 100,000 Yen when first appearing, and then significantly declining over the following years to just under 50,000 Yen by the end of the period.

Some human activities have negative effects on plant and animal species. Some people think it is too late to do anything about this problem while others think effective measures can be taken to improve this situation. Discuss both views and give your opinion. 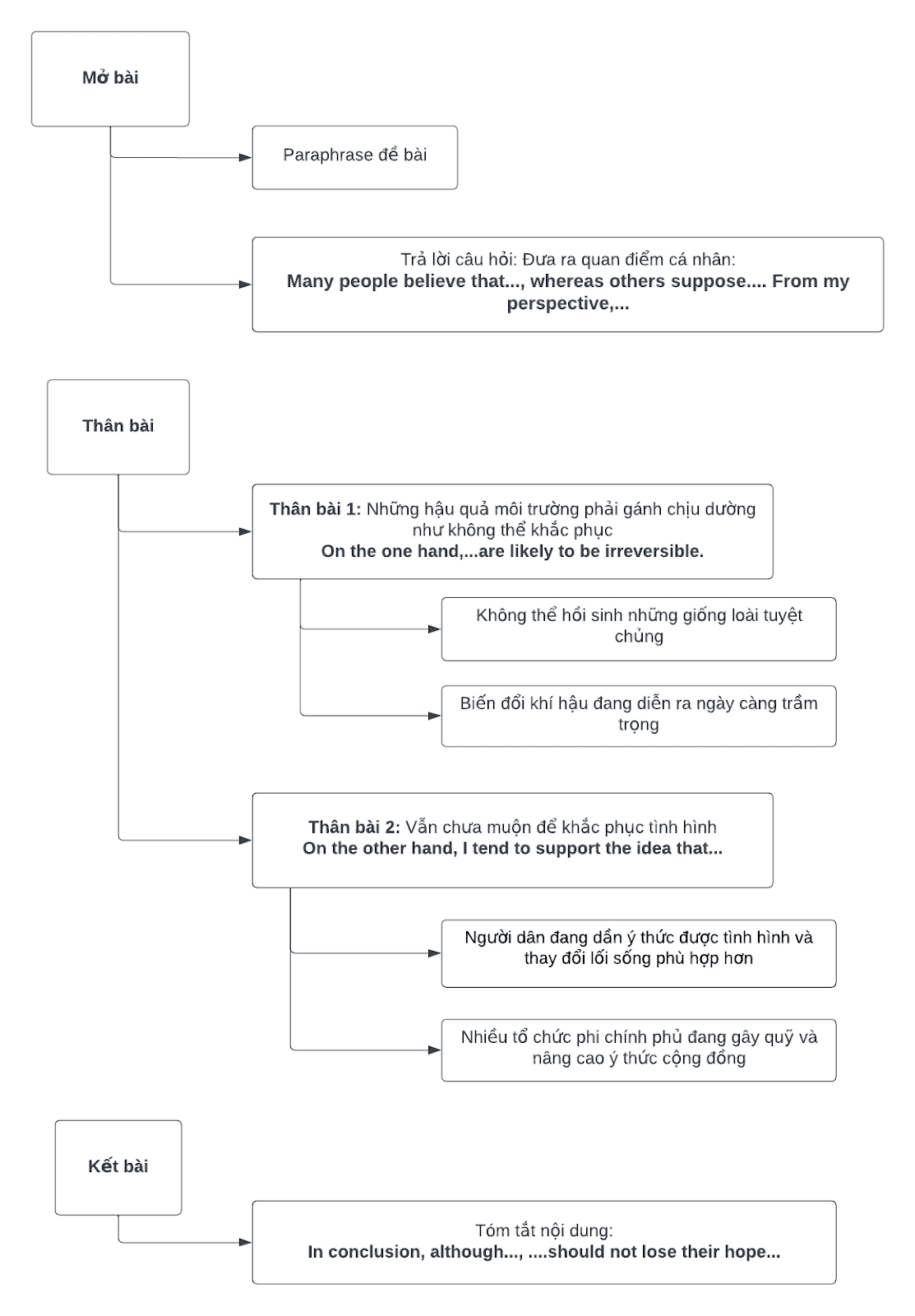 In recent years, environmental conservation has attracted a lot of public attention. Many people believe that humanity can no longer reverse those negative impacts on plants and animals, whereas others argue that mankind still stands a chance to improve the situation. From my perspective, though there have been numerous negative consequences, it is not too late to make a difference.

On the one hand, the serious damages which humans have caused to nature are likely to be irreversible. Firstly, it is a bitter truth that bringing extinct species back from the dead is essentially impossible. Taking advantage of natural resources found in animal habitats, humans have continually cut down trees, contaminating soil and water in order to satisfy their needs. As a consequence, the woods, rainforests and other natural areas are shrinking day by day, which in turn causes more havoc for many animal and plant species. Moreover, climate science has proved that the fight against environmental disaster is already lost. Despite people's best efforts, global temperatures still climb gradually, and extreme weather conditions have regularly hit the headlines in recent years.

On the other hand, I tend to support the idea that mankind can still take effective measures to alleviate those serious outcomes. Firstly, more and more individuals are becoming aware of the situation and adapting their lifestyles. Thanks to technological advancements, electric cars have become quite prominent these days, which significantly helps people to cut down their carbon footprint. Additionally, recycling and using environmentally friendly products is becoming a more popular trend on social media these days. Furthermore, various non-governmental organizations are raising funds and public awareness in order to prevent habitat destruction and protect endangered species. For instance, the World Wildlife Fund has attracted over 5 million global supporters and has continued to hold various projects to conserve the environment since 1961.

In conclusion, although there are many hardships to face on this journey to conserve and protect the environment, I believe that people should not lose their hope and learn from mistakes of the past, and insist on sustainable development.

“Soil and water are being drastically contaminated by toxic chemicals and non-degradable trash.”

“The world's natural resources are being consumed at an ever-increasing rate. What are the dangers of this situation? What should we do?”