The diagram below shows the recycling process of plastics.

Summarise the information by selecting and reporting the main features, and make comparisons where relevant. The given diagram illustrates the process of plastic recycling.

Overall, there are essentially six stages in the plastic recycling process, beginning with the buying, using and discarding of new plastic products and ending with newly recycled products entering the market again.

In the first stage, new products displayed in shops are purchased, used and thrown away. Plastic bags, along with other garbage, are sent and buried in landfill sites. Plastic bottles and containers however, are collected for recycling. After being gathered, the plastic bottles are then taken to sorting houses where they are divided into different categories.

Once the plastic has been sorted, it is then loaded onto trucks and transported to factories where it is processed and made into new plastic products. These new, recycled plastic products are then finally distributed back to retail shops where they are sold, reused and discarded once again, thereby continuing the process.

The diagram below shows the process of recycling glass bottles. 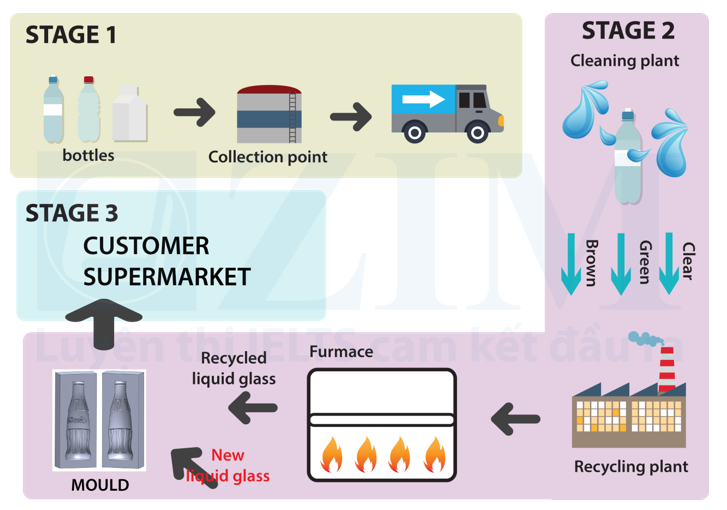 The diagram illustrates how glass bottles are recycled.

Overall, it is clear that there are three separate stages involved in the recycling process, starting with the collection of wasted bottles and ending with new products entering the market to be purchased.

In the initial stage, all glass bottles are stored in collection points from where they are picked up and delivered by trucks to a cleaning plant. Here, the bottles are washed with high pressure water, and then sorted according to color (clear, green or brown) and prepared for the following stages.

The clean and sorted bottles are then transferred to a recycling plant, where they are melted in a special glass furnace to turn the glass into liquid form. The recycled liquid glass, along with new liquid glass, is then molded to form new glass bottles. Finally, the new bottles are ready to be used and sent to supermarkets where they will be purchased and used by customers, thereby completing the process.

The diagram below shows the development of a particular area between 1965 and the present day.

The two maps describe an area before and after some developments from 1965 to now.

As can be seen from the plans, the most notable change taking place in the area is the construction of a road bridge, which replaces the ferry.

On the northern side of the road bridge, the forest on the left riverside has been cleared to make way for a large new car park. There is also a small car park which was built on the other side of the river and this car park can be accessed from the main road via a small path. Many houses and apartments were constructed around the car park.

To the south of the bridge, more houses were also built along the main road. Apart from these buildings, there are several changes which are expected to take place by 2018. These developments include a foot bridge which runs parallel to the main road, a yatch marina and a small car park.

The maps below show Hunderstone town at present and a proposed plan for it.

The maps illustrate a number of proposed changes that are to take place in the town of Hunderstone.

In general, while the area to the east of the railway will remain almost the same, the western side is going to undergo several significant changes, especially with regards to the transport infrastructure.

As can be seen in the first map, Hunderstone Town is currently divided into two main areas by a railway line, which runs from north to south and passes by a gas station. To the west of the railway, there is an air field which is connected to the main road (A1). A roundabout in the middle of this road connects the A1 road to the east of the town, and in particular, to the ring road around the town centre.

In the future, the airfield in the north west of Hunderstone Town is expected to be replaced by an industrial estate. A new railway line will also be constructed to provide further access to this area. In addition, a new, larger roundabout will be constructed midway along the road connecting the east and west of the town. A new road (A4) which will connect the A1 to the town centre will also be built in the south of the town. 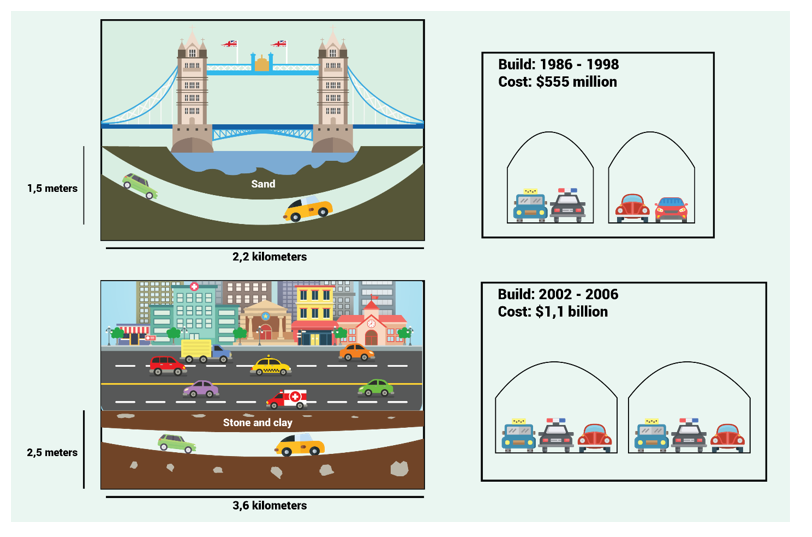 The first tunnel, which took twelve years to construct between 1986 and 1998, cost $555 million, and was built underneath a body of water and sand. Meanwhile, the second tunnel only took four years for completion but cost twice as much, at $1.1 billion, and was constructed beneath a layer of stone and clay. 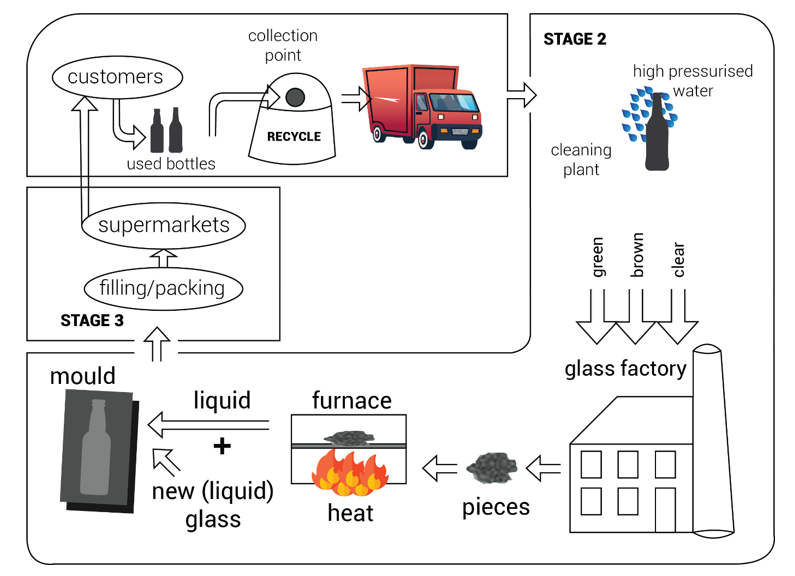 The given diagram indicates information about how used glass bottles are recycled.

In general, it can be seen that there are three stages in this process, commencing with the collection of used bottles, and culminating with newly recycled bottles used for storing drinks to be sold in supermarkets.

At the first stage of the process, glass bottles are used by customers and gathered at a collection point before being delivered to a cleaning plant by a truck. The second stage begins when the bottles are washed with high-pressure water, and subsequently sorted based on their colour (green, brown and clear). After that, the bottles are broken down into pieces in a glass factory and melted in a furnace to form a liquid. The recycled liquid glass is then mixed with new liquid glass and poured into a mould to form new glass bottles.

During the final stage of the process, the recycled bottles are filled and packaged, and then transported to supermarkets to be sold.